“Robert speaks the language of funk on his latest single, the appropriately titled “All About That Funk.” The cut is a gleeful throwback to the wide open bass and brass funk of the 1970s. The largely instrumental track features spacey keyboards, tight harmonized horn play as well as jazzy improvisation on the saxophone. Then, there is Harper’s thumb work on the bass. ” - Howard Dukes

“Harper’s “The Fonk Record” is comprised of seven original tunes (and a bonus track) which feature four special guests to add gusto to the musical mix. There is a solid bass groove, (driven by his custom Lairat Stega Pearl 5 bass), that is tied into a lot of very cool percussive elements. The tempos are driving and deliberate giving you something to funk out to.” - Raul Amador 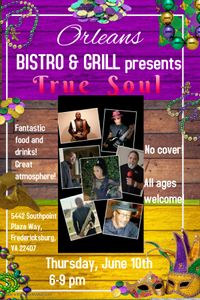 AREA-301 Live!!! At the Carlyle Club Concerts Unite Us Benefit in Alexandria

The DMV Award Winning Hip/Hop Fusion Band "AREA-301" along with bassist Robert Harper will be making a rare appearance in Alexandria, Virginia at the Carlyle Club for a performance you don't want to miss. 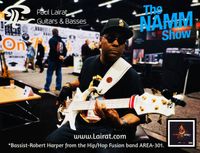 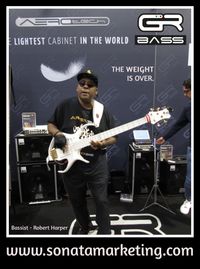 R&B/Funk bassist Robert Harper will be performing at the GRBass Amplification booth on Friday at 12 noon. *See NAMM directory for booth location. 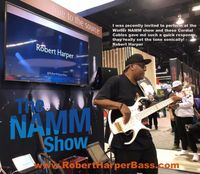 Funk bassist Robert Harper will be making an appearance and performing at the Cordial Cables booth on Thursday at 11:45am promptly! *See NAMM directory for booth information.

Burgers and Bands for Suicide Prevention

After 3 years in Severna Park we are happy to present the first Annapolis Burgers and Bands! Come show your support for suicide prevention with friends, music, and food at Burgers and Bands. A family-friendly event with local bands playing all day. Funds raised here go to support mental health programs in local schools and suicide prevention groups such as the American Foundation for Suicide Prevention and Warrior Music Foundation. Come for lunch, dinner or all day, and have a good time. Burgers and Bands is a fundraiser for suicide prevention. It's a community event, a party, and a wildly fun time. But most importantly it is an event with a purpose, to show people in Anne Arundel County, no matter what your age, you are not alone. There is help, there is hope, there are people who will step up, there are resources.

Come join AREA-301 for a show that's sure to get you out of your seat and dancing to the beat! Bassist Robert Harper and AREA-301 will be performing two sets on this evening. For more information please contact: 301-464-8800

The band Area 301 with bassist Robert Harper will be performing live in studio. 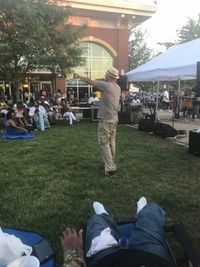 Bassist Robert Harper will be performing in the group "Off The Grid". Free admission Bring Your Lawn chairs!

TICKETS ARE JUST $10 IN ADVANCE WE ARE THE ONLY EVENT THAT OFFERS FREE ADMISSION TO ALL MILITARY, VETERANS, FIRST RESPONDERS, THEIR WIVES, HUSBANDS, SIGNIFICANT-OTHERS AND CHILDREN.

NEXTIVAL 2019 Featuring: HELICOPTER RIDES We were the first to offer Helicopter rides and everyone had to copy us. We have something special planned....SHHHH... FOOD TRUCKS NOT THE SAME ONES YOU SEE AT ALL THE OTHER EVENTS. We have trucks coming from a wide area including the best from DC, Philly, Annapolis, Baltimore and beyond. We have searched The Best Food Trucks and we don't charge our food Trucks. Our trucks are hand picked.

Bassist Robert Harper will be performing with the band "AREA 301" at 5:45pm on the Horn Point Harbor Marina Stage!

Created as a way to expose local music to a larger audience, Eastport a Rockin’ has drawn attendees from throughout the neighborhood and across the region since 1997 and is known as the local music festival of the summer. Some 35 bands will perform, keeping local, original music a key component of Eastport a Rockin’. Up and coming local bands with a wide range of styles will display their talents alongside longtime favorites. Over the years, Eastport a Rockin’ has featured such bands as Good Charlotte and Jimmie’s Chicken Shack, and the next big act just might be in this year’s line-up. From rock to folk to roots to blues to jazz to bluegrass to funk, and even some Kindie rock, the breadth of music types found at the Festival is sure to please everyone who attends.

Concerts for Causes inc. Presents DMV Funk ,Food, Wine, and Music Festival 2019 Featuring grammy nominated chart topping artist "Heatwave". "Clones of Funk" "In Gratitude Tribute to Earth Wind and Fire" "Feelin the Funk Band" "Off The Grid - with Robert Harper" and Special Guest Patyce "Choc'Let" Banks and more. The largest event of it’s type for Fun, Food and Entertainment featuring complimentary wine tasting from some of the best wineries n the area. Delicious food from the areas’ best restaurants and eateries.Enjoy the many unique exhibitors, craft vendors and artisans on hand for your shopping pleasure. Bring Your lawn chairs and your appetites. Benefiting Concerts for Causes Inc. 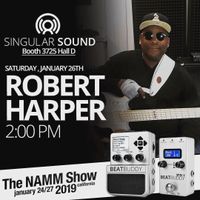 Bassist Robert Harper will be demonstrating the use of the BeatBuddy drum pedal built by Singular Sound at booth 3725 Hall D. 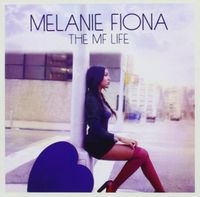 R&B Songstress Melanie Fiona will be performing her past and current hits live at the infamous RAMS HEAD ON STAGE in Annapolis, MD.

There will be three rare acoustic performances during the Namm Show with Bassist Robert Harper and his acoustic band "Robert Harper & Friends" at the Paul Lairat Basses, Optima Strings, and Traynor Amplification exhibitor booths. *The 4pm (last performance) event at the Traynor Amplification Stage will be videotaped by both Bass Player Magazine and Bass Musician Magazine. 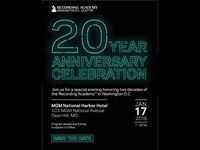 Join us for a special evening honoring two decades of the Recording Academy in Washington, D.C. on January 17, 2018

ROBERT HARPER to attend the production of "The Uncut Christ".

This timeless story, set more than 2,000 years ago, captures the birth of Christ and brings the town of Bethlehem to life! This free musical extravaganza displays the story of God’s redeeming love, told through comedy, dance and profound songs. Now in its seventh season, The Uncut Coming of Christ has become a favorite holiday family tradition and continues to add new twists each year. Visitors to the FBCG Worship Center are transported through time upon entering the Great Halls, which have been transformed into the Bethlehem marketplace.

Be sure to arrive one hour before the play to experience all the sights, sounds and smells. Have you ever wondered what life was like back then? Ever been curious about what the people wore or what they ate? You’ll find out during the fabulous pre-show production! Shepherds, Roman soldiers and regular townspeople will serve as your guide through the “city streets,” where you’ll see vendors, wares and much more. 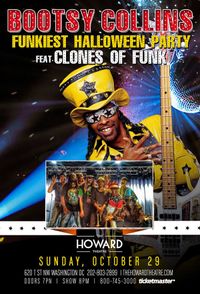 Bootsy Collins is hosting the funkiest halloween album release party ever! Featuring The Clones Of Funk....Doors open at 7pm....Ticket are $20 in advance. 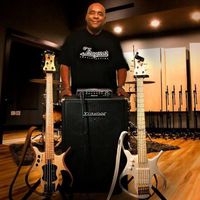 Friday 5 May 2017 07:00 - PGCC Spring Jazz Concert Bassist Robert Harper will be performing along with the Prince George's Community College Jazz Ensemble Friday May 5th 7:00pm..... *This is a free event.